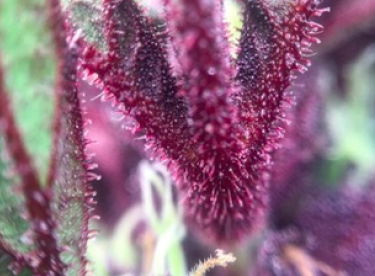 
Commonly called THC, or scientifically - delta-9-Tetrahydrocannabinol, is the most common cannabinoid in most cured cannabis sold in collectives and dispensaries today. In cannabis there is not only THC; it is joined by THCa, THCv, and delta-8-THC , as well as a many other known cannabinoids, including CBD and CBN, and many more unknown. delta-9-THC is the primary psychoactive compound that has been identified in the cannabis plant, though other trace cannabinoids are psychoactive, and others, like CBD, help modulate how THC effects the body. The compounds THCv and CBN have both been shown to be psychoactive, while THCa and CBD is non-psychoactive.


The delta-9-THC cannabinoid is the known cannabinoid responsible for the infamous "munchies" that cannabis consumers speak of.  However, ironically the compound THCv, a chemical relative to THC, is being researched as an appetite suppressant.  THC is the result of THCa decarboxylation, as THCa loses carbon molecules it becomes THC and then becomes psychoactive or as we say in production "active weight".  This same chemical process eventually will cause the THC to break down further into CBN, retaining some of its psychoactive qualities but also losing much of its medicinal value. 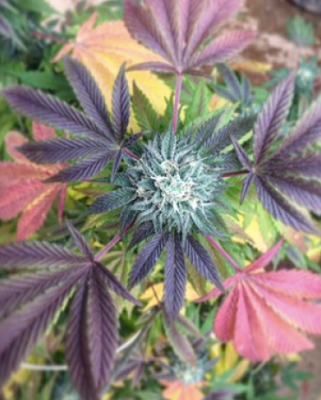 THC is a lipid found in cannabis, like most pharmacologically-active secondary metabolites of plants, and is assumed to be involved in the self-defense, perhaps against herbivores.  THC also possess high UV-B (280-315 nm) absorption properties, which, it has been speculated, could protect the plant from harmful UV radiation exposure.  This is why there are THC infused topical sunscreen products as well as others such as lotions, salves, lip balm, and even personal lubricant. (CLICK FOR Deliciously Dee's recipe for infused personal lubricant)

While Tetrahydrocannabinol (THC) refers to a psychotropic cannabinoid there is also dronabinol, trade name marino, which is a synthetic form of THC approved by the FDA, and is the principal psychoactive constituent of cannabis.  Its chemical name is (-) - trans-delta-9-tetrahydrocannabinol and the term THC is used to refer to isomers as well. **The pharmaceutical formulation dronibinol is available by prescription in the U.S, Canada, Germany and New Zealand. The prescriptions Marinol and Sativex also include THC or its isomers as active ingredients. 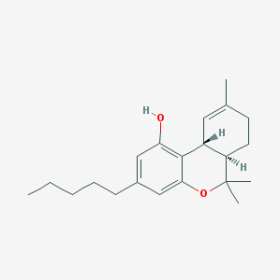 Pregnancy Category : Risk NOT ruled out

Neuroprotective - Slows damage to the nervous system and brain

- Dronabinol is the INN for a pure isomer of THC, (-)-trans-delta-9-tetrahydrocannabinol, which is the main isomer found in cannabis.  It is safe and effective for the uses in treatment of anorexia in people with HIV/AIDS as well as for refractory nausea and vomiting in people undergoing chemotherapy.

- A specific extract of Cannabis, nabiximois, where THC is a known active ingredient , was approved as a botanical drug in the United Kingdom in 2010 as a mouth spray for people with multiple sclerosis to alleviate spasticity, overactive bladder, neuropathic pain, and other symptoms.

Adverse Effects - an over-intoxication usually presents with decreased motor coordination, lethargy, slurred speech, and postural hypotension.  Non-fatal over-intoxication have occurred. (we do NOT say overdose in cannabis as that term is commonly known to end in death)

Legalities - delta-9-Tetrahydrocannabinol (THC) , along with its double bonded isomers and their stereoisomers, is one of only 3 cannabinoids scheduled by the UN Concention on Psychotropic Substances (other two being dimethylheptylpyran and parahexl).  It was listed under Schedule I in 1971, but reclassified to Schedule II in 1991 following a recommendation from the World Health Organization (WHO).  Based on subsequent studies, the WHO has recommended the reclassification to the less-stringent Schedule III.  Cannabis as a plant scheduled by a Single Convention on Narcotic Drugs (Schedule I and IV).  Passed in 1970 by the US Congress, THC is listed specifically under Schedule I by US federal law under the Controlled Substances Act.

- delta-9-THC has shown great promise on reversing the weight loss in association with anorexia in studies on mice and also humans.  Even the synthetic cannabinoids dronabinol and marino have been demonstrated to help with weight loss.  **Studies are still being done on these effects to see if there is enough to make THC a potential treatment for cachexia or anorexia.

- THC was the FIRST cannabinoid discovered that helped combat cancer, and since then it has shown to halt the growth of tumors, and in some cases to shrink them, through various methods still being studied.  In this recent case study, an infant suffering from a brain tumor experienced a 90% reduction in tumor size over a year of twice a day use of hemp oil.

- Donald Tashkin, a veteran cancer researcher, in the largest controlled study of its kind, found that daily smoking of THC-rich cannabis resulted in lower instances of cancer than in the general population of nonsmokers.  All smoking causes cancer by the creation of benzopyrene, but despite that THC is strong enough anti-proliferative to prevent more cancer than the smoking causes.

*Happy Fact :  The burning of ANY organic matter creates benzopyrene.  This means that barbecue, toast, and even grilled vegetables can give you cancer, but cannabinoids will not even if you burn it. (:

- THC has been shown in many ways as a great prospect in treating chronic pain because of its ability to change "the way the nerves function."  It also has been studied heavily for its use in treating neuropathic pain, mainly including the pain associated with cancer and HIV/AIDS.  Recent studies seem to agree that THC changes how we feel pain to make it more bearable rather than a pain tolerance by distracting them from their pain.  In this 2015 study on neuropathy in diabetic patients, it was found that THC "demonstrated a dose-dependent reduction in diabetic peripheral neuropathy pain."

- Robert Randall, the first medical cannabis patient in American history, and the man responsible for the passage of the federal medical cannabis program back in the 1970's. Compassionate Investigative New Drug Program, "was using THC-rich cannabis to treat the intraocular pressure caused by his glaucoma until the day he died in 2001.  One year after Randall's death, a study in Pharmacology and Therapeutics was the first to find cannabinoid receptors in the eyes, leading to the idea to THC's effectiveness on glaucoma.  Later in 2004, a study in the British Journal of Ophthalmology vindicated years of personal anecdotes and found that THC does reduce intraocular pressure, although the mechanism of action is still being studied.  Most testing on cannabis use focus on smoking, a 2006 study on cannabis use and glaucoma looked at sublingual cannabis use.  That study found that 5mg of THC administered sublingually reduced eye pressure without many side effects, and in that the same study it was found that CBD either did nothing or it worsened the eye pressure.

- Research has shown THC to be a powerful treatment for Post Traumatic Stress Disorder, possibly due to it's ability to help people forget.  This memory loss can include forgetting about trauma that should be let go of, so the individual can move forward and heal.  delta-9-THC is a plant version of the end-cannabinoid Anandamide, which has also been shown to be crucial in treating PTSD.  As of now, a host of scientists, including the award-winning researcher Sue Sisley, are conducting research into THC's ability in treating PTSD.  Dr. Sisley gained a lot of attention after Dr. Sanja Gupta covered her PTSD research in his CNN special, WEED III.  Research done by Dr. George Greer in New Mexico has also shown that THC-rich cannabis can reduce symptoms of PTSD by 75% on average.

- THC lowers the occurrences of blockages and/or other gastrointestinal inflammation associated with use of NSAID anti-inflammatory drugs.  delta-9-THC "protects against diclofenac-induced gastric inflammatory tissue damage at doses insufficient to cause common cannabinoid side effects."  A recent survey of Irritable Bowel Disorder sufferers found that 1/6 use THC-rich cannabis to treat inflammation."

- While assisting with the pain and nausea that often are associated with HIV/AIDS, THC directly fights the virus in unique ways that have only recently been identified.  In this 2012 study it shows THC assisting in HIV treatment by its activation of CB2 receptors and CD4 receptors.  Cannabis is known to affect our body by interacting with our endocannabinoid system, the CB2 and CD4 receptors are a part of that system.  A later 2013 study expands on the role of THC in combating HIV through its activation of CB2 receptors.


+ Be sure to check out Deliciously Dee's The Happy Chef Expert Cannabis Cookbook for a behind the scenes on "the Herb" and a breakdown of boiling points and recipes to help you maximize the benefits of this healing plant and learn to cook with cannabis!