WHY NOT JUST BE HAPPY? 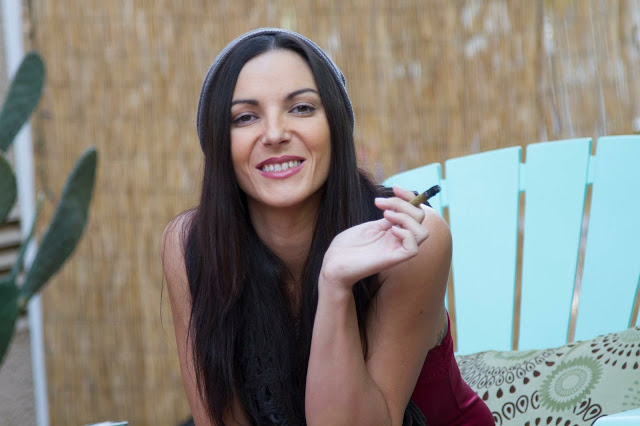 Why not be happy?
by: deliciously Dee

It really does shock me every day how ugly people allow themselves to get on a regular basis.  Why are they so miserable?  And why do they feel it necessary to spread their misery to others?  They can't keep that ugliness to themselves?  Bullies, sadist, and mean behavior in general has honestly taken over the world.  It is amazing how many people I meet every day that are such A-holes for no reason at all.  Do I need to hand them a joint or edible to chill them out? (because obviously they are not on enough weed, lol) Why is being a bully or being "stuck up" the "IN" thing to be these days?  What happened to kindness, class, and just being a good human in general?

I believe that people now a days feel like they are owed something.  And owed something for nothing. My father called it Dire Straits from their song "money for nothing and chicks for free".  That's how many are now a days. They want everything handed to them without them actually having to do any work for it.  Then, they get so upset with the results that they didn't get from the work that they didn't do. (really?) And yet they judge others so harshly on their HARD work and show them "hate" for making a name for themselves. (hmmmm, interesting)

People are all different.  One of the worst mistakes one can make is to believe that everyone thinks the same way that you do.  You may be the biggest fan of the Rolling Stones, but then there are those that hate rock music.  You may love Giada de Laurentiis (Simply Italian, Celebrity Chef), but others may hate italian cooking and because of which not be a fan.  If you are not a fan...why can't you just leave it at that and just NOT be a fan? Why does one feel the need to be hurtful and give their negative comments to an artist?  For this reason, I have the utmost respect for those that have succeeded in or are trying to brand themselves.  Those artists/people were/are brave enough to put their work out there to be judged by the masses.  They not only had the talent, they had the drive, the determination, the creativity, and the discipline to not quit where most would.  That's why, I believe, there are different classes of celebrities.  You will have A-Class, B-Class, C-Class celebs and those classes symbolize their impact on society.  The overall reach of how many people they had like their art, music, cooking, or what have you.   I know many artists and they are constantly working on their brands, their music, their images to become better versions of themselves in mastering their art.  All of that deserves respect, A LOT of respect.  So when someone takes the time to comment on an artists work with, "your work sucks, bulls&*t" ...hate, hate, and more hate.  Are they doing so in making themselves feel better?  (About what?) What have they done in their lifetime that has even come remotely close to having such a positive impact on society as most of these artists have or will do?  What did they do for the world or anyone?  Did they do anything for anyone except themselves ever? ( ...I wonder)
Technology has gotten faster, travel has gotten easier, health advancements have gotten better, and yet society has gotten worse.   You would think with all these inventions and human advancements that our society would advance also, no?  So much in our world has gotten better and people are still not happy.  They show us that they aren't happy by their rude behavior and ugly words.  People that are confident enough to be completely themselves and do not put themselves above nor below others is the MOST attractive character one can be.  Being rude, mean, bullying does NOT make you "boss","legit", or a "G" (contrary to what you may believe) ...it makes you look insecure and a person that a majority of people DON'T want to be around.  So...if you are like that...is that your brand that you want to put out for our society...to be an all around A-hole?  I guarantee you, if that's the case, you will NOT appeal to many masses.  Regardless of what you drive, how much money you have, fame, or physical looks... UGLY is UGLY any way you look at it.  You get back what you put out in this world.  Some call it Karma.  Others call it aura or energy.   So if you are consumed in putting out negative energy let me ask...what GOOD does that actually do for you or anyone for that matter?  Winston Churchill said "I myself am an optimist because there is just no use in being anything else."  Thank you Winston!!
He was right.  There is just NO USE in pessimist or negative anything!!! Constructive, yes.  Negative, no!  We need to build up one another and help each other become better people.  I am all for constructive criticism and being honest in giving ones opinion, in a good or funny way.  Why be nasty about it?
What if our teachers growing up taught us like this...

Teacher:
(laughs)
"Really? Are you an idiot or something? You should just quit now before you disappoint anyone else."

Yeah, that would piss anyone off if a teacher said that to their kid.  So why would anyone say something like this to another person?  Even tho the term "kid" has to do with young age, I believe, we are ALL still kids.  No one in this world knows everything and everyone in the world is still learning.  The world is in a constant state of change.  So we are constantly having to learn and adapt to these changes.  But one thing for sure hasn't change.  The world still has bullies and they have gotten worse!

People are troubled and sensitive souls that are battling their own demons on a daily basis.   You don't know what they are going through.  They could be battling a terminal disease or have just lost their only child.  Remember this if you ever get the urge to be mean to anyone.  Life is hard enough and no one gets out alive.  So lets all just be nicer humans, shall we?
GOOD!  Because,
I cannot wait for being happy, uplifting, and nice to be the "IN" thing to do.  Some people just need to revert back to the Walt Disney movie Bambi... 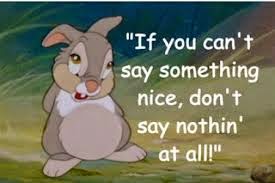