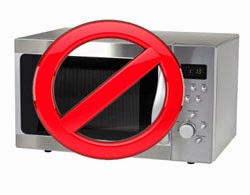 Throw Out That Microwave!
by: deliciously Dee

Like the saying goes “You are what you Eat”. To go along with that saying I would like to add that “how” you cook your food, I believe, has a HUGE effect on who you are and your life as well. In saying that I would like to talk to you all about my beliefs on the microwave.

A microwave oven, in simple terms, decays and changes the molecular structure of the food by the process of radiation. Radiation = electromagnetic waves emitted by the atoms and molecules of a radioactive substance as a result of nuclear decay. Radiation causes ionization, which occurs when a neutral atom loses or gains electrons.

I read a experiment conducted by Arielle Reynolds (Knoxville, Tennessee) about “Microwave Water in Plants”. In this experiment she divided filtered water into two parts. The first part was boiled in a pan on the stove, and the second part was boiled in a microwave. After the boiled water was cooled to room temperature, she used the water to water two identical plants to see “if” there would be any difference in the growth and life of the plant. Ms. Reynolds thought that the structure of the water may have been compromised by the microwave. I myself completed this experiment and the results led, as it did for Arielle, to the demise of my microwave as the “microwaved watered plant” was dead in less then 2 weeks. So if the microwave water kills plants -- it can definitely hurt people also, wouldn’t you think?

Well over 90% of Americans use microwave ovens for their daily meal preparations. When comparing them to conventional ovens, I agree they are more convenient and energy efficient which is why so few homes and restaurants are with out them. We’ve all been told that microwaving food is not the same as radiation treatment. The two processes are “supposed” to use completely different waves of energy and at different intensities. Of course, if microwave ovens were really harmful, our government would never allow them on the market, would they? Do you think it is possible that millions of people are ignorantly sacrificing their health in exchange for convenience?

There have been studies suggest that long-term exposure to non-ionizing form of radiation may have a carcinogenic effect (can provoke cancer). The Microwave oven uses a non-ionizing form of radiation which is not AS cancerous as the ionizing radiation. Nevertheless the ionizing radiation is highly carcinogenic and only few exposures to ionizing radiation can result in a random form of cancer. The FDA has claimed to have not found any links to microwaved food creating any health hazards to its consumers. The agency, however, has studies of the possibility that low-level radiation emitted from microwaves could affect those who stand nearby while they're in use. Our DNA is very sensitive to radiations of any form meaning any long time exposure to both ionizing and non-ionizing radiation can change the cell’s DNA. If this happens, then the cell’s in built instructions about how to grow, adapt and live will be confused. In this there is a possibility for the cell to do something very opposite from what it is supposed to do. So are you still willing to risk your health over a fast way to heat your food?

Some Stoners’ I know also use microwaves NOT to cook food but as an aid with smoking. I happen to know many who microwave their blunts saying it dries the blunt and makes it a lot smoother. Some also believe it increases the potency. In vaporizers, THC escapes from the buds around 350 degrees or less. THC is destroyed at temps not much higher than that. IF you purchase LOW quality bud that is still moist and wasn’t properly cured it can POSSIBLY have an effect of increased potency. If you have GOOD BUD (properly curred, quality, medical) there is NO NEED and lets not risk ruining our weed. Trust the chef and just purchase higher quality of weed and avoid zap frying your medicine!

Microwave cooking is not natural, nor healthy, and I believe it to be far more dangerous to the human body than anyone could imagine. The decision lies with each consumer as to whether or not you choose to eat food cooked with a microwave oven or to even purchase one in the first place. I ask you to do some research on who invented the microwave, and why…why the Soviet Union banned microwaves in 1976?…If there was doubt to “if” they are harmful, WHY in less then two weeks does microwaved (cooled down) water kill plants? …If the microwave changes the molecules of water and we as humans are 60% water, what will it do to us?

I’m sure once you answer these questions for yourself your microwave ovens may soon find themselves in the nearest dumpster.

So regardless of what “certain” organizations have released as far as information on the overall safety of the microwave, THIS HAPPY CHEF personally will not use them based on my own research, experiments and conclusions.